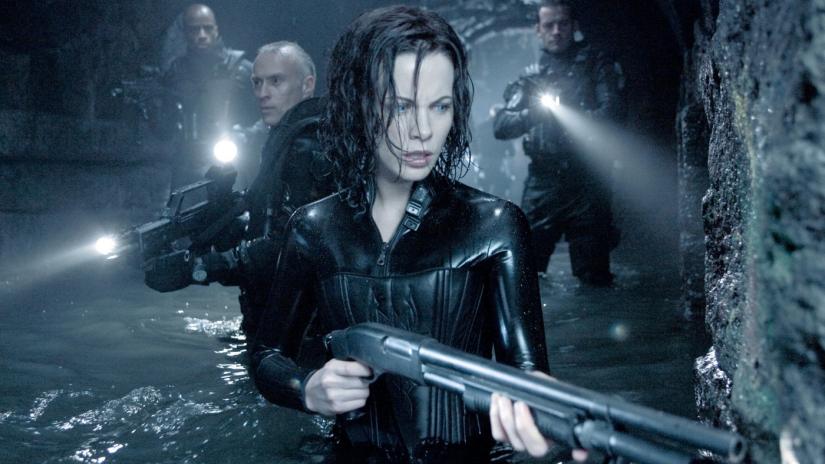 Article taken from Den of Geek!

The Underworld movies might be some of the strangest and most melodramatic B-action movies ever. And we examine why that’s a good thing.

Of all the B-movies that have grown, survived, flourished, and then declined well beyond their first installment into an unending string of preposterous sequels, none have been quite as colorful as the Underworld movies—the ones that feature Kate Beckinsale in skintight leather fighting werewolves. Despite enjoying a nigh monochrome visual scheme of blacks and pallid whites (which is only occasionally punctuated by supernaturally tinged glowing blue eyes or spurts of scarlet liquid), this is a franchise that has often sought to infuse a bit of prestigious highbrow blood into its B-movie veins. Quizzically, via repurposed Shakespearean conventions… but, you know, with vampires.

To be clear, from its 2003 inception Underworld has always known exactly what it was: The Matrix aesthetic of shiny black leather-numbers now adorning beautiful people who may or may not transform into gruesome monsters. With bullets, guns, and just enough horror conventions to allow it to cross-pollinate genres, it wasn’t that different on a surface level from a number of early-2000s actioners, particularly the just as indissoluble Resident Evil franchise.

Nevertheless, whereas Paul W.S. Anderson’s mediocre video game adaptations have always wallowed in their trashy B-roots, Underworld as originally conceived by writers Len Wiseman, Kevin Grevioux, and Danny McBride strove for gravitas and respectability. To put it mildly, it would be dubious to suggest that the vampire vs. werewolf death matches ever quite surpassed their silver bullets and close-ups of fang-on-flesh action, yet their insistence on building a mythology as dense as any role-playing game has always given it a certain charm. From the outset, these are vampire movies by way of 16th century histrionics. A poetry of pulp. At least in its earlier installments, that could be quite a beguiling stare into the undead’s realm.

The first Underworld movie is a tonal odd duck, which might be why it is still fairly memorable, at least in flashes of iconography. The vision of Kate Beckinsale earnestly waxing on about centuries of war between the “vampire and lycan clans” (“werewolf” was apparently too camp by 2003 standards) while perched in a trench coat in the rain above the streets of Budapest is the stuff of genre daydreams. Here is a brooding dominatrix gargoyle ready to descend. She then plummets from the cathedral’s height with such grace and poise that the wire attached under the coat is no more consequential than the fact that the movie is heavily informed by the visuals of the already-dated The Matrix from four years prior.

The same year as Underworld, the Matrix sequels were released to massive fanfare and disappointment. While technically dazzling, those movies swallowed one too many blue pills and became overly enamored with their own turgid world-building. By comparison, the tiny-budgeted Underworld was also thick with trenchant mythology that filled-in superfluous details to its universe, but the movie was a cathartic release after the more high-minded Wachowski affairs. Here, the action scenes that director Len Wiseman concocted propelled the material with a sense of kitschy fun and chic choreography, such as when Beckinsale’s Selene uses her guns to make an impromptu elevator out of a tenement building’s second floor. With Underworld, the filmmakers still knew theirs was a movie that featured dayglo blue bullets that apparently “fired” high concentrations of UV-light.

Still, what allowed the franchise to stand taller in its heyday was its implicit self-importance, even if only Wiseman and his cast of distinguished actors believed in those airs. Because distinguished they were, and well-read in this kind of melodrama at that.

This affectation is self-evident just with the lead actor for whom the entire series was built around. While Ms. Beckinsale is likely most well known in pop culture circles today for the ridiculously form-fitting leather which she dons again and again in these movies, back in 2003 she was the English ingénue that first came to Hollywood by appearing as Hero in Kenneth Branagh’s Much Ado About Nothing. Through adapting the Bard’s invention of the romantic comedy, Branagh perhaps made the best Shakespearean movie to date by avoiding the far trickier issues that come with translating his tragedies to the screen. Beckinsale also filmed the role during one of her summer breaks from Oxford. And before going fully to Hollywood, she then appeared in productions on the West End, portrayed Jane Austen’s Emma on ITV, and starred in the now cult classic Stella Gibbons-adapted period piece, Cold Comfort Farm.

Not the typical action movie starlet, her casting in what has become her signature Hollywood role was the beginning of a trend for the series. In fact, the father of her first child, Michael Sheen, appeared as that same movie’s antagonist, Lucian. At the time, it is unlikely the target audience for the film would have been aware that Sheen was a respected stage actor (he met Beckinsale on the West End’s The Seagull and had played Henry V for the Royal Shakespeare Company). Yet, the filmmakers clearly did since they pushed hard on the Romeo & Juliet subtexts in Underworld, which were about as subtle as a stake through the heart.

In the film, Selene is ensnared into a romantic entanglement with a character named Michael, the film’s major casting flaw since Scott Speedman is about as compelling as any of the other stone-faced statues found on the Budapest location. Still, because Michael is bitten by a werewolf, his romance with Selene is of the forbidden variety as she is a centuries-old vampire—who has been exterminating lycans for just about as long to boot—and their “houses” could never tolerate such a union.

These elements are actually strengthened by the much stronger Sheen as Lucian, an ancient lycan who, as it is revealed in the third act, had a vampire bride back when werewolves were merely slaves to the nosferatu covens; she was the daughter of Viktor, Bill Nighy’s deliciously over-the-top vampire elder. Played as a doting Lear whenever he is onscreen with Beckinsale’s Selene, and otherwise a warmongering Macbeth with everyone else, Nighy knew exactly what kind of movie he was in but turned up its camp-factor to 11 by offering his own background as an English theater veteran who’s only too happy to steal scenes.

That first film belongs just as much to Nighy and Sheen’s scenery-chewing animosity as it does to Beckinsale’s impressive high-kicks. And it is the operatic tone that all three set, complete with a third act twist in which Beckinsale learns from a vampire bite that her relatively new father figure, Viktor, killed her actual parents centuries ago—not unlike the supernatural revelation that allowed the Bard’s Danish prince to know his uncle had supplanted his biological father in a murder most foul—that carries the movie. There was no genuine need for such knotty and sensationalist plotting in this kind of movie, not when many of Underworld’s B-action movie contemporaries like Resident Evil (2002) or Blade Trinity (2004) had little plot at all. But the eccentric pretensions only accentuate the first Underworld’s weird enticements.

While none of the sequels were ever as good, most of them attempted to double down on these theatrical virtues. Underworld: Evolution (2006) featured one of the most beloved Shakespearean actors of his generation, Sir Derek Jacobi, in its most pivotal role. As a former member of the Royal Shakespeare Company who performed in The Tempest, Richard III, Much Ado About Nothing, and Hamlet (the latter of which he played on BBC, as well as in the real-life basis of Elsinore Castle in Denmark), Jacobi brought an overpowering sense of dignity and austerity to a role as absurd as Corvinus, the first and oldest immortal. In retrospect, only Jacobi could play the progenitor of all immortal species, having apparently sired two immortal sons, one of whom was bitten by a bat and became the first vampire, and the other who was bitten by a wolf and thus transformed into the first lycan.

It is silly stuff, but Jacobi treats it like any other classic mythology when he stares down the film’s villain, Marcus (Tony Curran), his disowned vampiric son who has come to slay him with as much cruel treachery as when Mordred, the unwanted incestuous bastard babe of King Arthur and his half-sister Morgan le Fay, likewise mortally wounded his father of Arthurian legend. Bleeding from a patricidal sword wound, Corvinius’ version of Avalon is to pass his super-pure blood on to Selene, with Beckinsale drinking from the master like a strangely noble revision of Mina Harker’s coupling with Prince Vlad.

And the movie after that, Underworld: Rise of the Lycans (2009), skipped Selene altogether, and got to the un-beating heart of it all by spending an entire prequel film on Nighy’s Viktor vs. Sheen’s Lucian in the Middle Ages. Wiseman was gone, Beckinsale was gone, and the budget for the impressive werewolf effects from Evolution were definitely gone, but the franchise in some ways was never more in its element.

The Romeo & Juliet allusions from the first film could be more boldly explored now that there was a love story allowed to end tragically, and we learned beat-for-beat the bitter fate of Lucian’s vampire bride, Sonja (Rhona Mitra). There is also something even more heinous in the film’s classical flourishes, with Nighy’s Viktor resembling Shakespeare’s eponymous papa from Titus Andronicus. It’s a lurid turn from the Stratford playwright where a Roman general ultimately “mercy kills” his daughter Lavinia after she’s been “sullied” and raped by two Goths. In Rise of the Lycans, Viktor sentences his own daughter to death by sunlight after he learns she is to be mother to a child that she’d share with her secret husband, and Viktor’s furry-slave, Lucian.

The fact that Sonja and Lucian are in love just makes Viktor more of a bastard and allows the ridiculous passion play to be completed in all its grandiosity, including Michael Sheen giving his own version of a Spartacus speech to a pack of lunar activity enthusiasts.

These ponderous indulgences in the theatrical in no way elevates Underworld beyond its core appeals, which are often as thin as the many female vampires’ choice of wardrobe. Nonetheless, it distinguishes the franchise as one of a kind among its contemporaries, giving it a kind of unnecessary but welcome wrinkle that stands apart. It is also why more recent fare in this subgenre can feel all the emptier and vacuous in their banalities, including the painfully awful Underworld: Awakening (2012), the fourth installment in the series where Beckinsale returned but none of that earliest charm did.

Yet, within those 2000s camp-staples where everything was about leather and slow-motion bullets, let it be said that Underworld proved there are more things between heaven and earth (and vampires) than are dreamt of in your philosophy.